There are many depictions of spiders from the mythology of the Ancient Greeks to African folklore to today’s popular culture. The spider has symbolized patience due to its hunting technique of setting webs and waiting for prey, as well as mischief and malice for the slow death it causes, its venom often seen as a curse. In Ancient Egypt, the spider was associated with the goddess Neith as spinner and weaver of destiny, a link continuing later through the Babylonian Ishtar and Greek goddess, Athena.

The most notable ancient legend of the spider is the story of the weaving competition between Athena and the sometimes princess Arachne. This fable was added much later to the Greek mythos when Ovid wrote the poem Metamorphoses between AD 2-8. Due to her father’s skill with cloth dying, Arachne became adept in the art of weaving. Eventually, she began to consider herself a greater weaver than the goddess Athena and challenged the goddess to a weaving contest to prove her skill. Athena wove the scene of her victory over Poseidon that had inspired her patronage of Athens, while Arachne wove a tapestry featuring twenty-one episodes of infidelity amongst the Gods of Olympus, which angered Athena. The goddess conceded that Arachne’s weaving was flawless but she was infuriated by the mortal’s pride. In a final moment of anger, Athena destroyed Arachne’s tapestry and loom with her shuttle and cursed Arachne. Out of sadness, Arachne hung herself soon after. Taking pity on her, Athena brought her back to life as a spider using the juice of the aconite. Athena made sure that the spider retained Arachne’s weaving abilities. In Greek, Arachne means spider.

Not all spiders spin webs specifically to hunt prey. They have been attributed by numerous cultures with the origination of basket-weaving, knot-work, spinning and net making. Web spinning has also led to the association of the spider with creation myths, as they seem to have the ability to excrete their own artistic worlds.

Continuing the exploration of natural structures of architecture, Angelo Musco takes inspiration from the beauty, strength, and mystery of a spider’s web. There are many different types of webs that are spun for a variety of purposes. The funnel-web spider’s burrow characteristically has irregular silk trip-lines radiating from the entrance with an overall affect reminiscent of a womb, or nest and is ideally suited for Musco’s exploration. For some the burrows appear as a soft, tranquil haven and for others it represents the potential danger of being drawn in and trapped. The inherent strength of the spider’s silk is well known and as Musco built his own web, he created a compelling strength with the tension of the bodies (over 48,000) that span, interlock, and overlap in a wondrous rich multi-dimensional series of web-nests.

Since spiders can be interpreted as negative or positive, Musco has translated that graphically through the bodies that make up the entire positive and negative space of the spider web. This dynamic structure of two interconnected burrows hold a mystery and ominous danger of what lies deep within the burrow holes. Aranea draws the viewer in with the unknown and doesn’t release them due to the tension created by a complex web of humanity.

Digital C-Prints on metallic paper, mounted between Alumium and Plexi-Glass 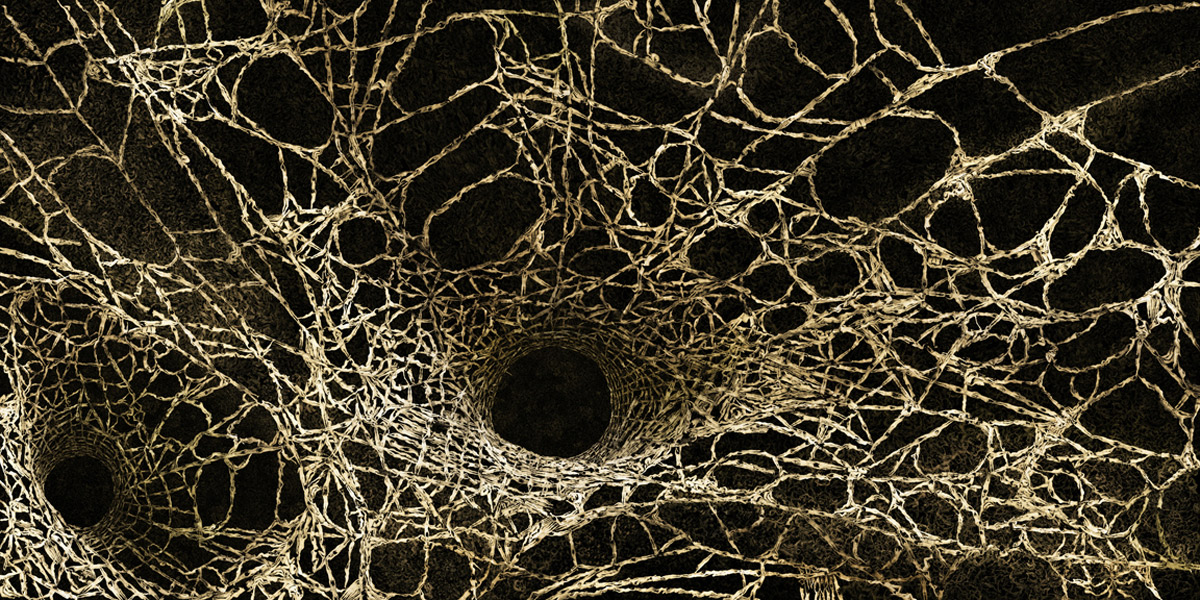 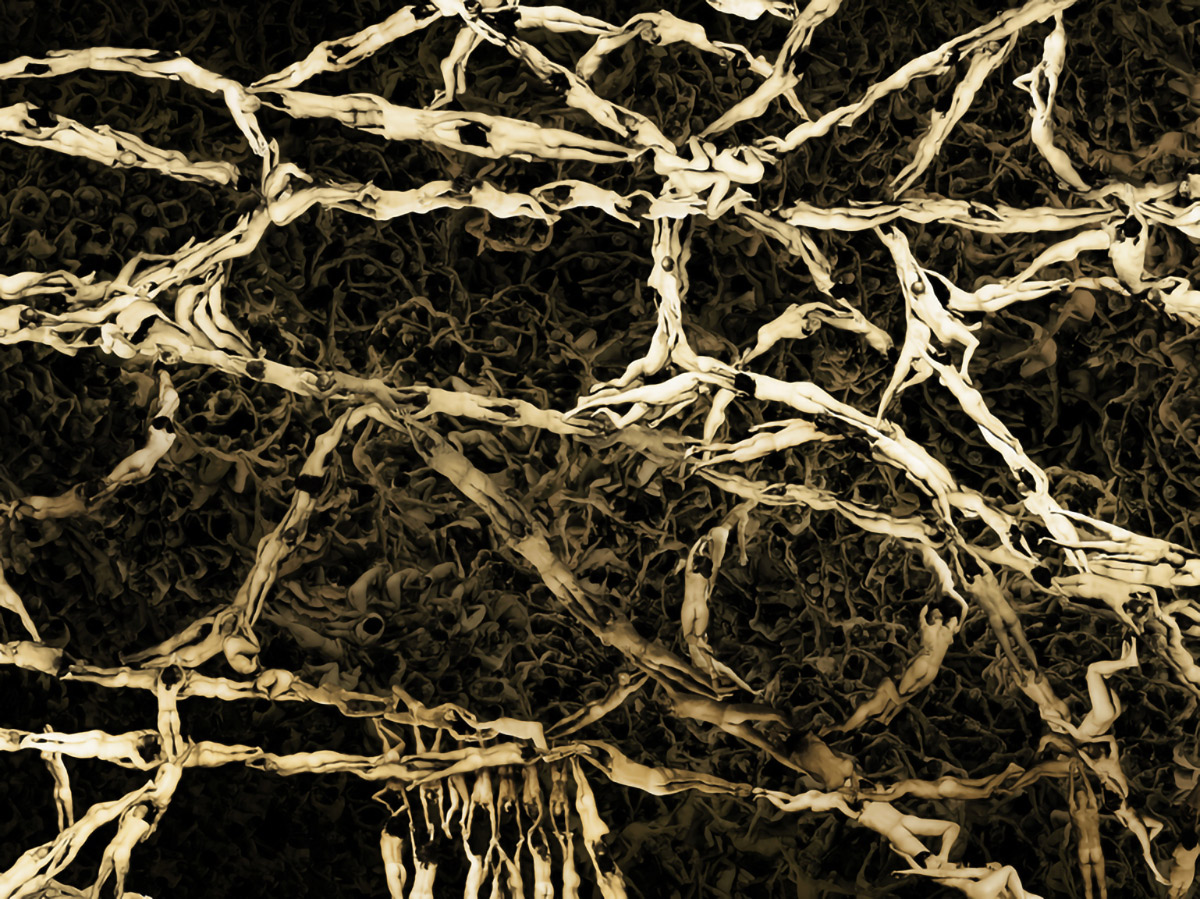 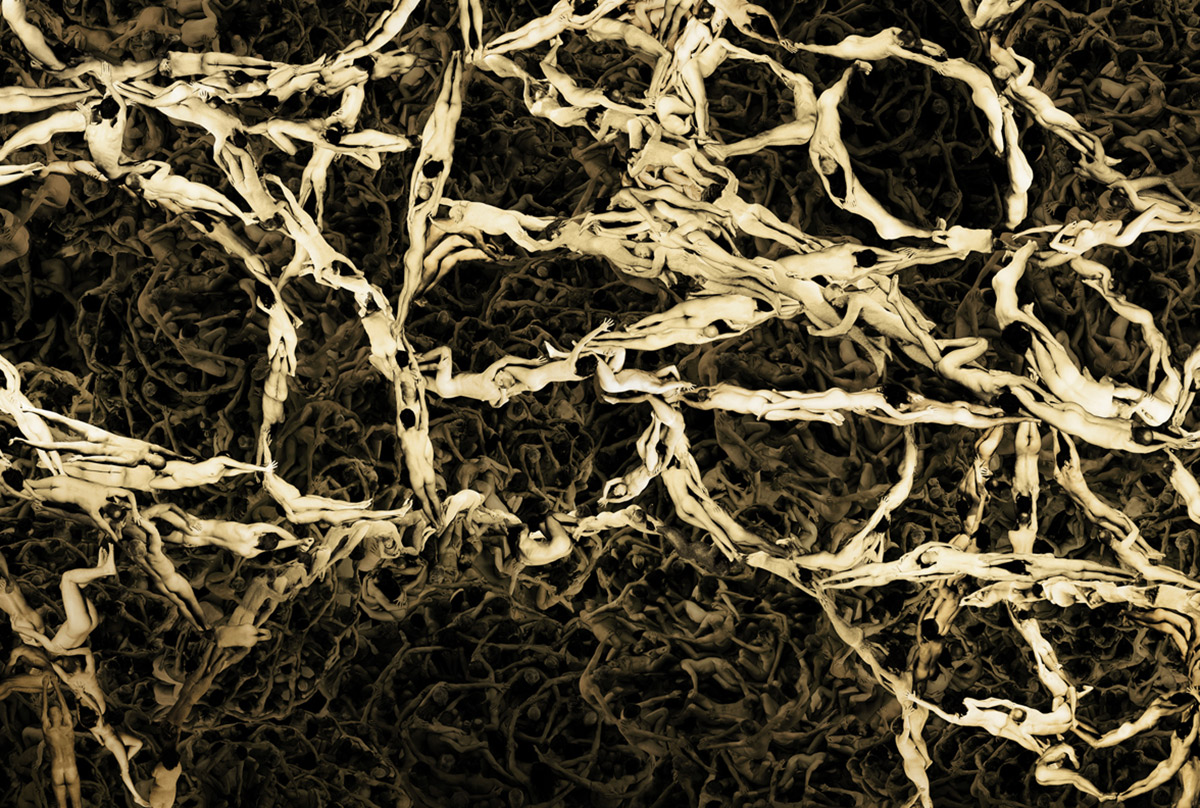 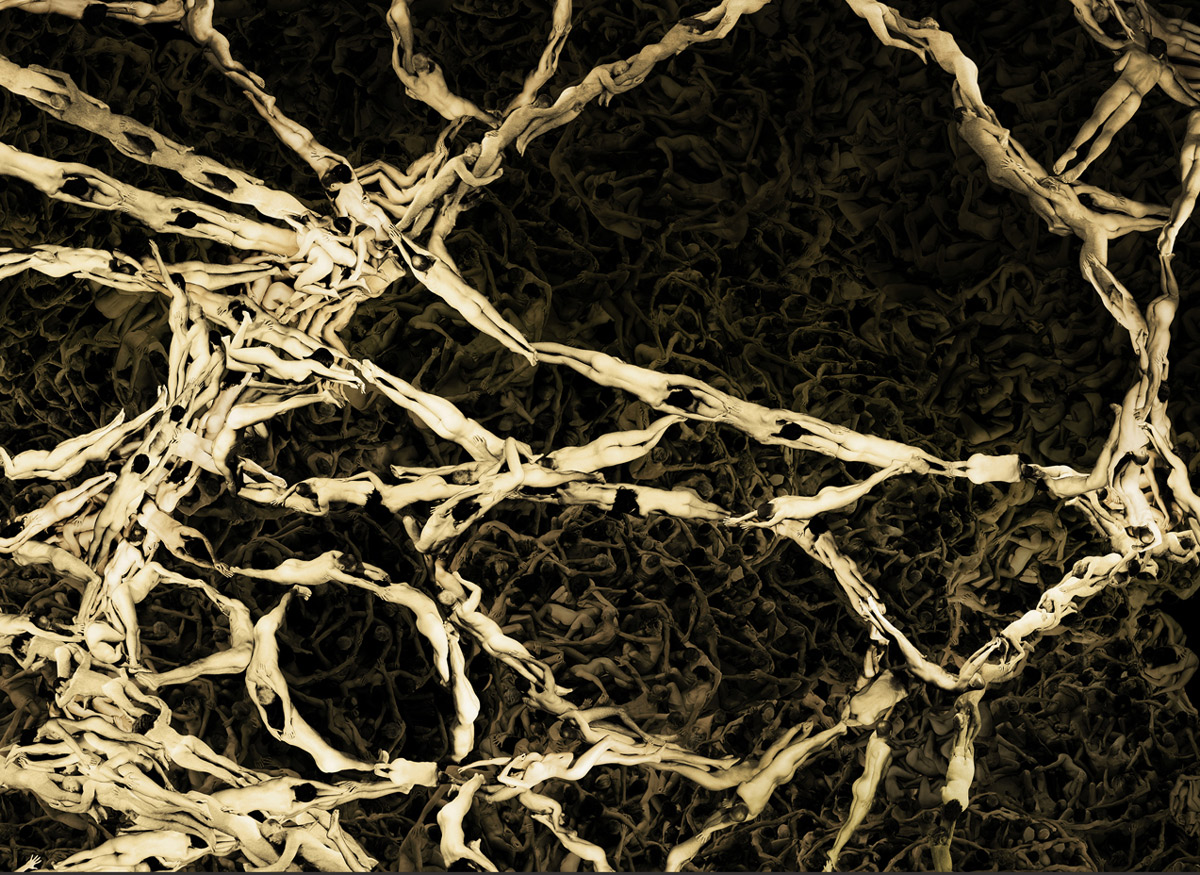 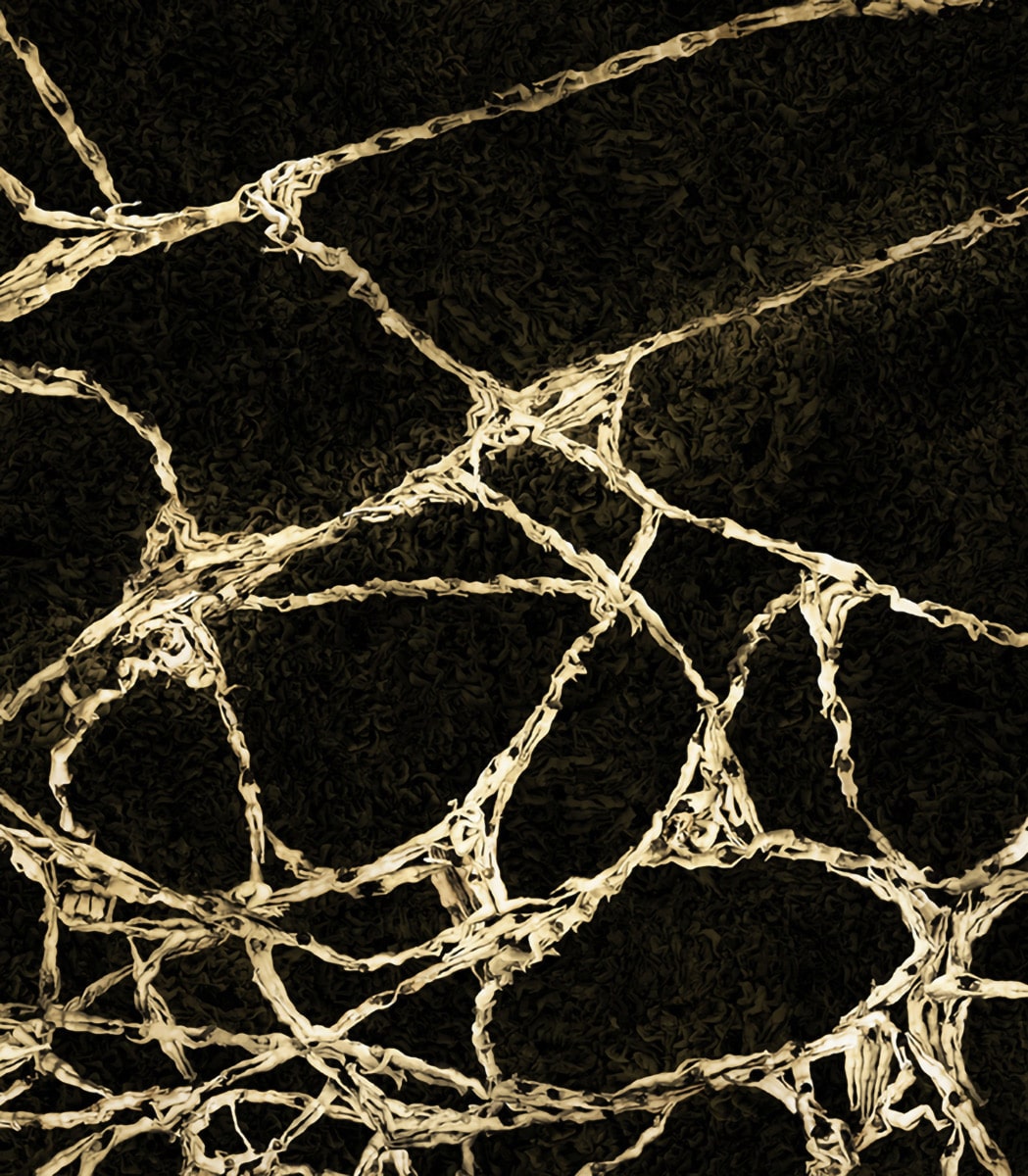 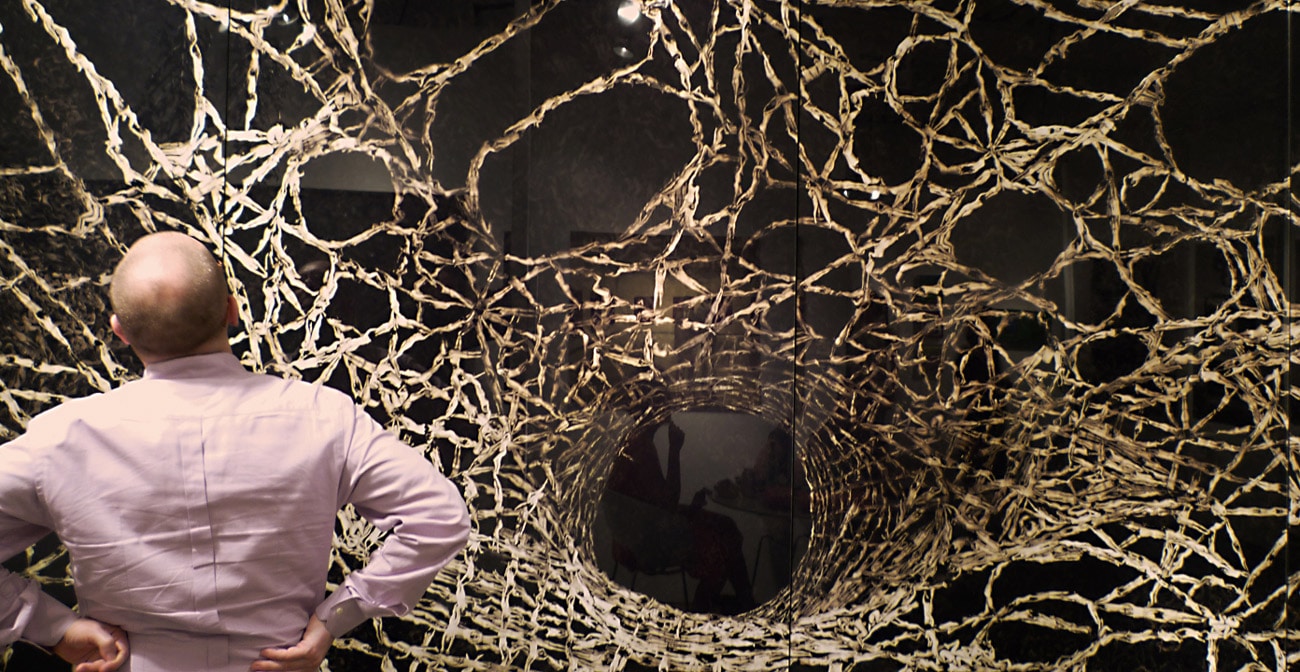 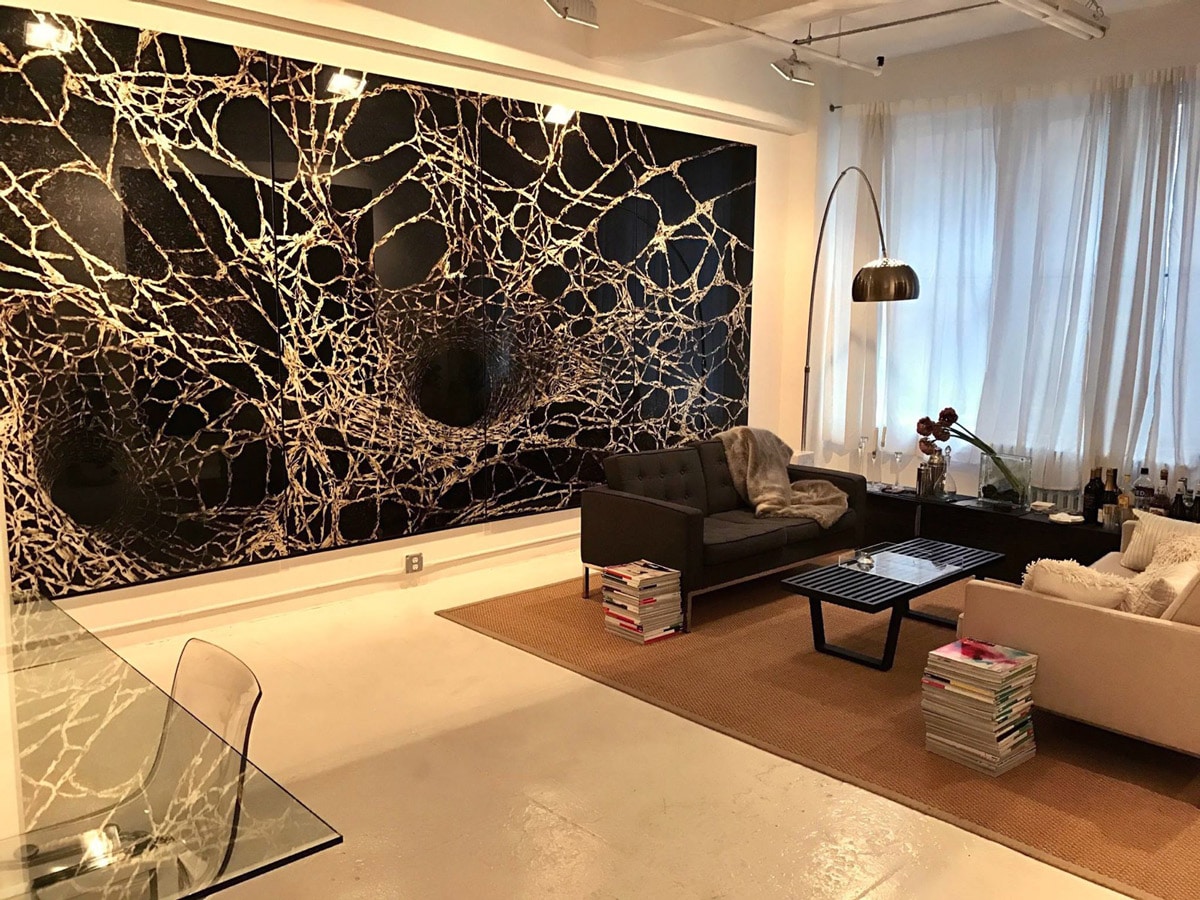 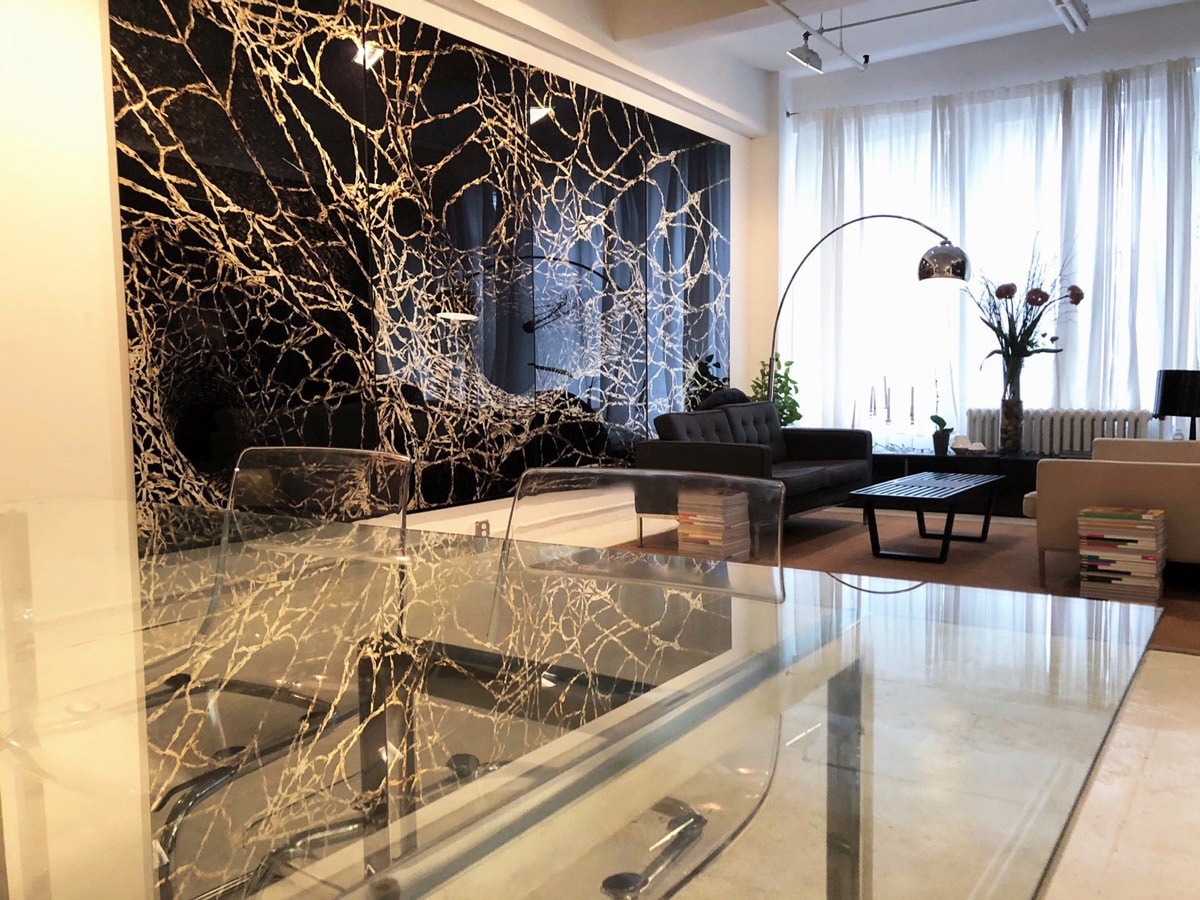 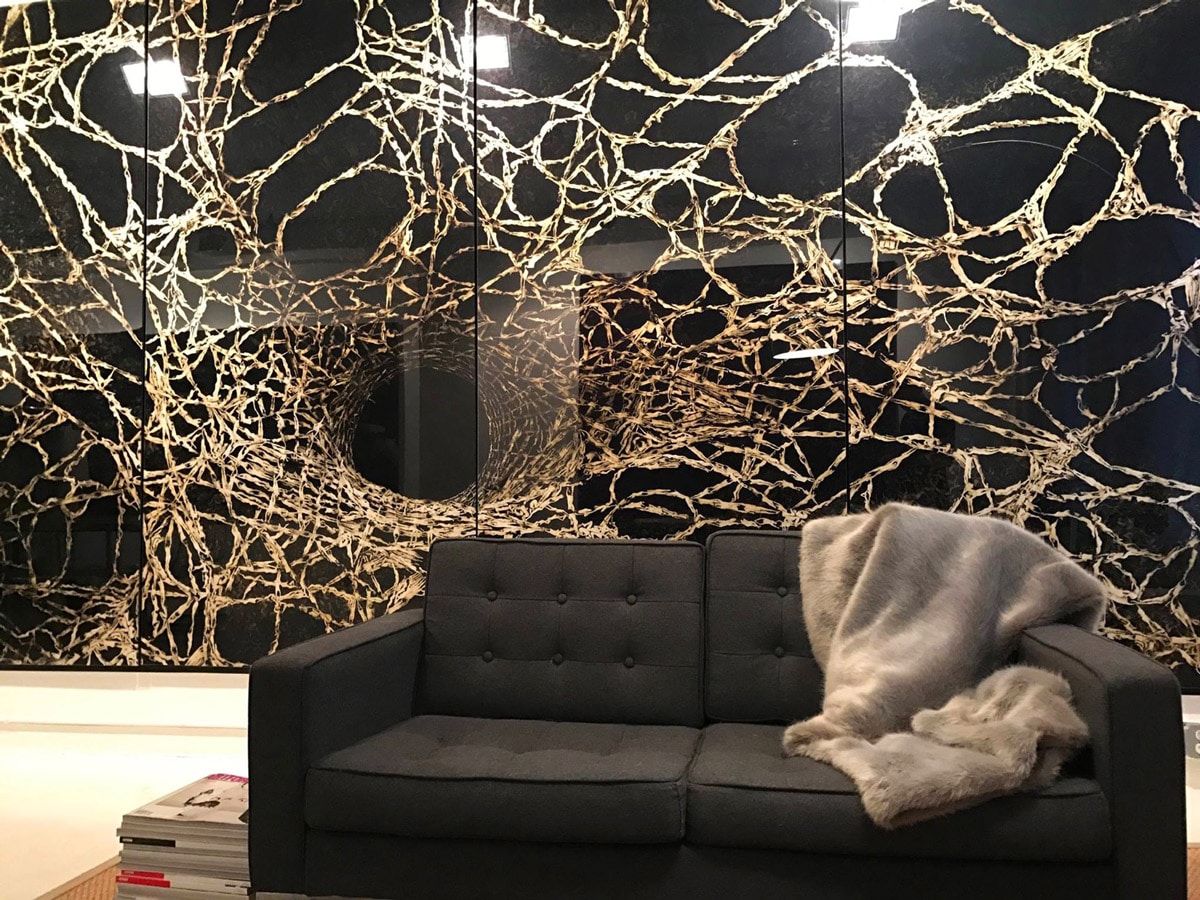